After two inimitable graphic novels, his third book begins with a conspiracy conceit — a secret think tank of public policy boners called the Greater Harappa Commission (est 1998, the year “Sri Sarnath Banerjee” became unemployed) are cataloguing their society’s changes, and this book is their findings, their ‘files’. The Harappa Files is not a graphic novel, it is “loosely bound graphic commentaries” to “cut a ‘society of anxiety’ into thin chewable fillets”. It is also an accurate and brilliant invention.

First the familiar. Files has the same capering, mincing, cosmopolitan sensibility we watched in Corridor and The Barn Owl’s Wondrous Capers. It again presents his palace of ‘looks’, variously penned, pencilled, painted and pastelled, mostly watery but also with sudden hulls of colour. Banerjee is still using that lovely font alongside his drawings. Of all his international characters, his Bangla bhadralok still have the best faces.

Each chapter is usually only two to four pages and only mildly connected with the next one. Mostly we get vignettes of Nehru’s children and their iconic products like Boroline, Lifebuoy and Vicco. Banerjee has found a new swiftness here, a shorthand able to terminate just in time, so that in the early chapter ‘Cracks’ it’s just enough to show a soldier wading through water in his underpants and exclaiming, “Fucking Maoists”, and leave it at that. This shortness, we discover, works superbly in the medium, so that “the pragmatic housewife” smiling on the tree stump she’s just axed doesn’t have to say more than “No more dry leaves on my cement porch”. Which leads us to why it works — unlike his dutiful fellow-practitioners, Banerjee pays attention to his language. That adjective “cement” is loaded with his sly wit and the panel is idle enough to make us pay close attention. The book’s slightness makes its pages spry and sensitive to the press and pull of sentences. 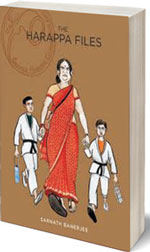 Banerjee’s pinning of cultural frippery remains acute — urban families like the Kukrejas who still use scooters are “upper proletariats from lower-middle-class colonies”. (This also leads him to his occasional cliché, as on the next page: “The proletariat knows how to wait.They have waited all their lives.”) He remains an alert transcriber, so you get the distinct haircuts you’d expect in the episode set in South London. His gags work because they’re slight, such as Ratan Tata suddenly appearing at the end of a long-ish chapter on the upward mobility of Jaguars. Or casually inserting a bromide of recommending coconut water to calm IIT aspirants.

Banerjee’s specialty has been the deliciously arcane trivia that he somehow loops into a narrative, and his internationalism holds good again, from JC Bose in Calcutta to Che Guevara in Tanzania to downtown Chicago’s great L. He takes pleasure in naming people and their products. He explains neither his foreign nor his Indian references (“History is written by garment exporters”). He ventures with an oblique, light touch. He remains incorrigible. These urbane books have been his slim genre, and in our literature of unvarying intellectual slimness, they have been a fat gift to his readers.

The last page lists collectors who’ve acquired some of the book’s graphic panels. Contracting the form has produced a winning book for Banerjee, but it is his writing — his protests notwithstanding — that fuels the success of Files. He has the best Indian sentence I expect to read all year:

“The same year, JC Bose was looking at two fornicating ants, wondering whether to cremate the pair with his magnifying glass or let his good upbringing come in the way.”