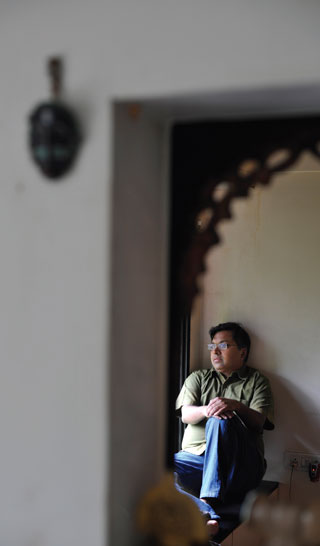 I BELIEVE I exist for a reason. I believe I have to write these things — which is my own private delusion, of course,” smiles Devdutt Pattanaik. In the ever-eccentric intellectual landscape, he cuts a mild but momentous figure. He’s a self-taught scholar of Indian mythology who reads only English, and has no intention of learning other languages. He’s a prolific writer and also an increasingly talked-about corporate coach with the enviable title of Chief Belief Officer at Future Group, the corporation behind Big Bazaar and Pantaloons.

He’s also fast reaching critical mass. He’s exhausted most Indian gods as themes for primers and maintained a steady torrent of articles in popular media. He was a speaker to the Jaipur Literature Festival this year and to TEDIndia last year. Now he’s published perhaps his most ambitious book yet — Jaya, a retelling of the entire Mahabharata in 350 lucid pages, where he blends several folk and regional variants of the epic into one linear narrative, alongside his line drawings. Each of the 108 short chapters begins with a mildly contrarian epigraph and ends with an engaging tippani (comment).

Devdutt is a hound for clarity. He writes sentences that are uncluttered and jargon-free, and is proud of how clean his line drawings look. He reads only a few pages of contemporary books — to get some rasa of the style (Arundhati Roy) or to decipher their popularity (Chetan Bhagat). He’s a superb talker, with a fluent orator’s trick of eliding one idea into another to make them seamless. His voice rises with his arguments but remains sibilant, and even the sporadic expletive sounds soft in the air. Leaning forward at the stomach on his portly frame like a mother hen, he looks out from behind his glasses and smiles at the world.

The 39-year-old has himself felt a rising sense of urgency in the past two years. He’s just about fed up with what he sees as western hegemony of thought in the Indian mind, where everything is divided into Good and Bad. The enemy is objectivity, and Devdutt is out to show how subjective Indian thought is more accommodating (though not necessarily liberal). Reading Jaya brings this startlingly alive. Dharma, according to the Mahabharata, is a better way to build a society since it’s more concerned with what I Am rather than what I Have. Jaya reads like a gripping novel about the degeneration of dharma. Moral foibles, sexual deviations and even unintentional mistakes are all accommodated, even as the cosmos furiously takes karmic notes. Heaven is only available till your next mistake.

According to Devdutt, no other mythological populariser, from BR Chopra’s television serialisation to RK Narayan, has bothered to tell the entire epic to the common reader or viewer. Most retellings treat everything before the gambling scene between the Pandavas and Kauravas as prologue, concentrate on the war and excise several chapters after the war and Yudhishtira’s ascendance to heaven. Using Excel sheets to carefully plot the epic, Devdutt placed the gambling section as Jaya’s middle chapter, balancing out the story both before and after. Jaya is spare with transcendent moments — you get the rasa only intermittently. “I was more concerned with width than with depth,” says Devdutt, “It was a very scientific plan.”

Born to a homemaker mother and business consultant father who trained with Peter Drucker in New York, Devdutt has been a lifelong Mumbaikar. Always a good student, he realised in second year of medical school that he had no interest in being a doctor. After graduating, he discovered his gift for writing and did short medical writing and consulting gigs, including at Apollo and Ernst & Young (E&Y). He continued to struggle and wrote his books.

From E&Y, Devdutt was invited by Kishore Biyani to join Future Group. “I’ve seen the underbelly of the corporate world. I’ve lived it, so I know what I’m talking about. I’ve always been hired by mavericks who liked what I could do. They’d hire me and then have no idea what to do with me! Only Kishoreji figured it out — by leaving me alone. He’s not threatened by lack of structure. He approved when I came up with the title Chief Belief Officer, saying that it’ll become a talking point — people will want to know about belief, which is what he wants too.”

Devdutt works on clarifying the Future Group’s belief systems. Using mythical stories, he turns abstract Indian thought into workshop modules to advise company leaders on a more Indian mindset — he says Biyani believes this has helped the group make more money. “Indian myth is obsessed with decision making,” says Devdutt. “I don’t help leaders take better decisions, I give them a framework to make their own decisions. I bring clarity to them.” This is not, though, synonymous with unchecked growth. “I’ve met many big leaders and politicians,” he says, “and often what it boils down to is — mine is bigger than yours!”

While he dismisses concepts like corporate social responsibility (CSR), he’s firm that corporations must take a longer view across future generations — just like people who believe in rebirth. Rebirth is a more powerful idea than ‘ethics’ to decide whether to mine a mountain, whether to displace people.

Two years into his Future Group job, 2010 has been newly tumultuous for Devdutt, mostly due to his TEDIndia talk, which catapulted him onto the global speaking circuit and enabled him to take his intellectual fight abroad (contrariwise, he prefers his books speak for themselves and doesn’t promote them). Locally, he still struggles with Indian publications that don’t understand why he wants to discuss things like dharma and Vishnu on their business pages — not their religion section or Diwali issue.

HE FEELS his writing career is also cresting, though he believes it’ll show results only after several decades, if not longer. He next plans to publish a business book, a twin set on Shiva and Vishnu and contemporarised children’s stories like Shiva Plays Dumb Charades and Krishna and the Identity Card. He continues writing several columns, and in the past two months he has travelled three times across the Atlantic. All this besides his full-time job. Every day he wakes at 5 am and works till 10 pm, catching up on sleep in the car. All of which is of a piece with his epic namesake — ‘Devdutt’ is the name of the conch-shell trumpet that the demon Maya gifts Arjuna.

The strong sense of leading a cultural charge, a zealous war, is reminiscent of the characters Devdutt writes about. But though on a roll, he does temper it some with his long patience. On the wall across his home’s main door, he’s decorated a small alcove with his drawings where he kept a Jagannath figure. But when he felt things continually amiss at home, he replaced it with a Tamil statue of a folk figure astride a boar — and has since felt the house easing up. “I know the wisdom,” he says of learning from the epics, “but it’s still hard to live it.”