IN HIS essay Nations, Fictions, Mario Vargas Llosa says that “the old nations seem more serious, necessary and realistic than the new ones because, like religions, they have acquired an abundant literature and also seem to be validated by the oceans of blood that they have spilled”. For us subcontinental provincials who can properly read only in English, Pakistan is finally reaching such realism of local words. (Hold that thought of Pakistani blood just a minute.)

A clutch of fresh writers has emerged there, many young enough to be promptly herded as a new generation, that is writing terrifically in English. These writers have been appearing steadily and variedly where it matters — on festival stages and prize shortlists — the Booker, the Pulitzer, the Orange, the Commonwealth. The perks — of flattery, opportunity and amplified voice — have arrived punctually, mostly.

In 1997, the British literary quarterly Granta published an issue marking India’s 50th year of independence, titled India! The Golden Jubilee. The issue was automatically seminal in granting Indian writing such high-church collecting. Despite safe choices, it was also automatically prescient because it cohered a set of Indian writers in English who were serious and in it for the long haul. Now, duly following contemporary buzz and currents and other electric trends, here comes Granta’s similar knocker of Pakistani writers, titled, what else, Pakistan. The new book presents five pieces each of fiction and reportage, four memoirs, three poems and the work of 14 contemporary Pakistani artists — and stitches a unity of talent the way India! did 13 years ago. The view is again superb.

The problem with Granta, and most literary productions like The Paris Review or The New Yorker short story, is that they appear tempting but turn out to be too rarified and tasteful to be read with any pleasure. It’s often no fun, which was true of Granta’s deliciously packaged Sex issue last spring. Pakistan is unusually readable, and this is where we can chat about the blood.

Though Granta didn’t give briefs to the contributors, almost every prose work in this book is soaked in brutality — physical, religious, military, romantic, political. Every writer presses against the extremisms of daily Pakistani life, and the pieces testify to a deep anxiety about the pressures of repression and misogyny upon both women and men. 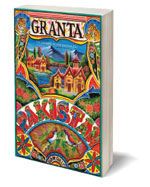 Nadeem Aslam’s novella about a young wife terrorised by her family for a male child is horribly impressive in its controlled gore, but the first half plods a bit. Once the fantastic enters, though, Aslam’s pace and language swoop up and don’t stop till the last sentence. Mohsin Hamid’s short story about a beheading has an unoriginal approach to its subterranean violence; what it does have is a level of ambition and the talent to pull it off that you don’t see in much Indian writing. Rather than the later programmatic horror of the beheading, the dread is really in those first few sentences as shadows are “stretching” from the torches behind the bedroom door. Jamil Ahmed, a 79-year-old retired civil servant from Islamabad and published for the first time, tells a story of a couple on the lam from the woman’s family, which is seeking honour revenge. The story ends with the couple’s stoning in the desert and the scent of dry blood in the sand.

TURNING TO lush language of private spots, we hit Uzma Aslam Khan’s bewitching story about a love based around Pakistani glaciers. Khan gaily risks the overwrought, but the surprise is that more often, it all somehow works. A bigger surprise is Daniyal Mueenuddin’s short poem, his first ever published, about trying tripe in Rome while swathed in memories of his paying farm in Pakistan. Mueenuddin’s prose so far has been too tentative for me, too formal, but this superbly chapped verse renews hope that his prose too will eventually relax. But the real great delight of this book is Mohammed Hanif’s story Butt and Bhatti, about a cop’s crazy love for a nurse. Hanif is superbly cantankerous and courteous, with a finely absurd sense of metropolitan Karachi life. With wizened humour and surprises of delicacy, the hospital and police station horrors are perfect for him. He is already his own writer, the best in this book, strong, witty, emotional, ambitious in technique.

Several critics have cupped their tin ears and announced that the book’s non-fiction is better than the fiction. The reportage here is actually thin, dull and sometimes just embarrassing. The New York Times’ Jane Perlez bloats a small anecdote about Jinnah with historical data and biography, while the Guardian’s Declan Walsh goes through the paces at the Pashtun frontier. These and other foreign correspondents collected here can report but they are no writers. Walsh perpetrates stentorian comedy like: “Down the centuries they have stirred poets, produced legendary warriors and frustrated mighty empires”. Basharat Peer rambles out yet another too-familiar history of the Kashmir militancy. Among the memoirs, Kamila Shamsie has an intriguing piece about Pakistani pop stars and their religious and political journeys, but remains weakly charged. Aamer Hussein is honourably simple in remembering his dissipated beginnings in London, of being “bored of being young”, but most of the other non-fiction clumsily buries a decent story in attempts at larger reverberation.

Pakistan doesn’t have the establishment heft of figures like Anita Desai, RK Narayan, VS Naipaul or Nirad Chaudhuri who appeared in the 1997 India! What it does have, however, is a much greater excitement of promise. As a national group, as a generation, as storytellers, as craftsmen — slice them how you will, the best writers here are stronger, maturer, more morally serious, more direct of feeling, more skilled, more ambitious, and most importantly, more impatient than most Indian writers in English today. The final joy of this book is in discovering just how many of them not only have a feeling for the language but have the talent and intent to make that feeling count for something.

So what more can we shyly expect? In all our subcontinental crowding, amid the whelming mediocrity and its inevitable flatterers, will there also rise some truly great writers? At least two in a generation of talents? Will their words hold our eyes? Will we recite them? Will the doors hurl from their jambs?