22 notes on censorship prompted by the 2012 Jaipur Literature Festival debacle. 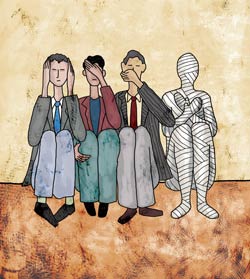 “Everybody knows there is no fineness or accuracy of suppression; if you hold down one thing, you hold down the adjoining.”
Page 1 of The Adventures Of Augie March, Saul Bellow

1. It helps to be pedantic about this.

2. The hyperbole has been alienating. The four writers who read out from The Satanic Verses at the 2012 Jaipur Literature Festival (JLF) (Amitava Kumar, Hari Kunzru, Ruchir Joshi and Jeet Thayil) were not being heroic — they didn’t have much to resist then — they were stepping out in solidarity for a principle and against a sense of growing persecution.

The festival’s last afternoon, leading up to the debacle of the cancelled Salman Rushdie video broadcast and the impromptu onstage debate, was thick with tension for the organisers and some friends who were involved in the backroom negotiations, while for many other writers and visitors in the crowd, life went on as usual as they ambled, squatted, milled, chattered, drank chai.

3. Bans and censorship are abuses not just of our freedom of expression but also of our freedom of consumption; they are abuses against our discernment. Can we really not handle new visions of Gandhi in Joseph Lelyveld’s biography, or dissenting Kashmiri politics in Sanjay Kak’s documentary, or the political critiques in Rohinton Mistry’s novel? Can we really not handle the sex in The Girl with the Dragon Tattoo, or Pranava Prakash’s nude paintings in an art gallery? Can we really not handle beguiling versions of the Ramayana in Ramanujan’s essay, or the beef-eating habits of ancient Indians in DN Jha’s book? Censorship is also inherently self-abusive.

4. Others have read from The Satanic Verses publicly — Supreme Court lawyer Rajeev Dhavan has said how he, Dileep Padgaonkar, Alok Rai and others read from the book at New Delhi’s Mandi House in January 1989. And if you’re reading this, you can read the book too: it is available on the Internet, and people like cyber-law expert Pavan Duggal have said downloading it isn’t illegal. Most lawyers say there should be nothing illegal in reading aloud from the book since the ban is on its import. It will now be argued in the courts.

5. The court cases against the JLF organisers and the four writers will hopefully force the government to explain the ban on the book. These cases and Rushdie’s upcoming memoir about his decade in hiding should also impel us to force the government’s hand to install a process — no transparent one exists today — to periodically review past bans.

6. There is a view that the four writers shouldn’t have used the festival for their gesture of solidarity. But: they cannot be heroes if things go well and grandstanding publicity-hounds if things go badly. The festival was the right place for them — it became their platform once the organisers invited them onto the stage. The organisers themselves seem to understand this larger responsibility: JLF co-director William Dalrymple has since written of that numbing last afternoon, “…what is the point of having a literary festival, a celebration of words and ideas, if you censor yourself and suppress an author’s voice?” No, there will be no point to the festival if the invited writers are forbidden from challenging the fast-settling status quo. The fate of the festival is the same as the fate of free expression. The problem is not that four writers spoke up at the JLF, the problem is that so few of us did.

7. Very few of us have an appetite for giving up whatever we are doing, reduce leading our lives, and instead fight a good fight against cultural intimidation. Many of us have the instinct to look away, joke, deny, hide. One might say this is what is meant by being apolitical. But at Jaipur, did we go beyond that?

8. Another view goes that once they dissented, the four writers shouldn’t have stayed away from the festival or left town. Amitava Kumar and Hari Kunzru left soon after their readings, while Ruchir Joshi and Jeet Thayil left only two days later. It’s true that if they’d stayed at the festival to face the consequences they might have further become lightning rods for others to rally around. But that’s our problem, not theirs. And surely we have to be as sympathetic to their panic as we have to be to the organisers’ panic on the last day — both took pragmatic decisions for the future. Faced with an incorrigibly immoral system closing in on them, the four left for their work, their loved ones, their lives. Their absence took the sheen off their deed somewhat, but their deed stands.

9. Social protest and political incorrectness do not have to, in that bathetic phrase from the JLF statement, be ‘within the four corners of the law’. As long as it’s peaceful, your protest can fall outside the law. This is a matter of strategy, not principle.

10. The Satanic Verses explores the birth of a religion, the convulsing effects of migration, the corrosion of a metropolis like London. But it is especially worth defending because of that which it’s supposed to negate, but only questions: its tender accounts of our impulse to believe, religious and otherwise, and its generosity in enfolding all of us ‘believers’ into its rapture. It’s also occasionally a very funny read, with insider Bollywood jokes and babu preenings. When the Congress government’s finance ministry banned the book in 1988, it added that “the ban did not detract from the literary and artistic merit of Rushdie’s work”.

‘The book was banned after representations by two or three Muslim politicians, including Syed Shahabuddin and Khurshid Alam Khan [father of current Minority Affairs and Union Law Minister Salman Khurshid], both members of Parliament. These persons, whom I do not hesitate to call extremists, even fundamentalists, have attacked me and my novel while stating that they had no need actually to read it… You know, as I know, that Mr Shahabuddin, Mr Khurshid Alam Khan and their allies don’t really care about my novel. The real issue is the Muslim vote.’
Rushdie’s open letter to PM Rajiv Gandhi, October 1988

11. Elections pander to collectivist instincts. Condemning the politicians won’t get us more than a short distance; this particular notoriety accrues to their validity. It won’t hurt, though, to remind everyone around you that despite banning The Satanic Verses in 1988, the Congress further lost the Muslim vote and the next year’s general elections. Imagine any potential conversations in the past few weeks between Salman Khurshid and Rahul Gandhi, and you will begin to see the hot farce we’ve landed in.

12. Boundaries of sensitivities do exist, and some people are offended if they are crossed. There needs to be space to express such grievances, whether real or phantom, so that they can be argued and negotiated. But we can’t legislate these boundaries so that they harden into censorship. Meanwhile the State, instead of appeasing tantrums, needs to be held accountable for protecting artists under threat.

13. On one hand: victim mentality, hoodlumism, the life of the street. On the other: creativity, contrariety, the life of the mind. This isn’t so much a fight with fundamentalists as it is a fight with politicians who will, as electoral strategy, let fundamentalists trample our rights. It isn’t so much a fight for freedom of expression as it is a fight for the marginalised liberal voice, which has so little heft in electoral calculations.

14. How do we resist the goons without the assurance of rule of law, without the assurance of fair courts? The political machinations have been claimed ad nauseam but remain under-reported. What really happened behind the scenes between the Congress governments in Rajasthan and Delhi? When we believe that politicians have covertly asked thugs to hold our liberty to ransom so that they can — later, overtly — take credit for the same, the media needs to call their bluff. The media can help.

15. Cafeteria chatter, petitions, magazine articles, they will help keep up the conversation. But we also need prosaic resources — a process to appeal bans, protection for artists under threat, a more effective human rights commission — for an accounting of cultural intimidation.

16. Till now there is news of six cases in Jaipur and one in Ajmer against the JLF organisers and the four writers who read out from The Satanic Verses. How can we help?

“All are welcome. If possible, I’ll provide some good books to read.”
Sukumar Azhikode, on hearing of a rally to his home to protest his writings

17. In 1990, some religious negotiators got Rushdie to issue a statement of Islamic faith, and when they didn’t keep their part of the bargain, he described it as the most regrettable moment of the affair. His friend Christopher Hitchens wrote in 1999 how he’d changed his mind about this event: Hitchens didn’t like it at the time but now he appreciated “that moment of hesitation and trepidation”. The defeat on JLF’s last day was a similar crooking of the knee, something we can look back upon to check for our frailty. A bracing thing happened on that despairing, calmed afternoon: we were forced to face ourselves being bullied. How lovely that this has happened to us, and how silly that we are so guarded and fusty and irony-shy as to have missed it.

18. Remark at dinner last night: “It hasn’t happened yet, but how long before I have a self-censoring impulse?”

19. It is wishful to assume the censors haven’t entered our heads. The space for thought has shrunk, is shrinking right before our eyes. They want not just that Rushdie shouldn’t come, they won’t even allow his image on a screen. They want not just that Kak’s documentary not be screened, they want the entire event cancelled. Each step they gain is harder to reverse.

20. We need non-thuggish conservative arguments in our culture. This will require a vaster body politic of conservatism, so that it’s not always about chauvinism or collectivism. We need more conservatives who’re invested in the life of the mind and don’t have to pander to a constituency.

21. The journalists and the gossips will move on. They’ll say they won’t, and then they will, since the politicians will move on. Reader, you don’t have to follow them. If you wish you can download and read The Satanic Verses yourself. It’s a ride.

22. Why read at all? For a sense of empathy and risk. Because only reading will prevent you from mistaking fiction for fact and help you see the internal borders of a made-up story. Why read? Because culture is conversation.