Mohammed Hanif has written a beauteous, imperishable novel. It is about everything in our world. You should read it.

As for the rest. 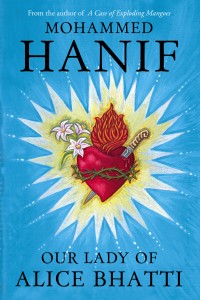 He wanted a superwoman. Someone with many great powers who runs around Karachi, someone “beautiful and bright”. It turned out that wasn’t a fantasy story, after all, but nobody told the men in the book. It’s their book, y’know. Who’ll tell them… you?

Anyway, that’s not how it worked out. Alice was soon taken over by his obsessions.

Razia Bhatti, his editor at Newsline, was as close to a superwoman as he’s seen. She could “just get things done that most crafty men couldn’t”. When she died young and sudden, he thought he’d give her some actual superpowers and write about her life. But he didn’t write about an editor, though the name seems to have stuck.

He has some formless memories of when his mother was dying from cancer. A month and a half in the hospital. The medication. He fluffed her pillow. And always this woman, this late-night shift nurse — very tired, and very sexy too.

Back in primary school in Okara, he was friends with two Catholic boys. They came top of the class, and he’d be third. He knew already that they came from a certain family and that they wouldn’t go to high school. He went, and never saw them again.

He didn’t end up writing about school or Catholic kids. These strange bits from his youth led him, but these are whims you follow. They happened such a long time ago.

He doesn’t even watch the National Geographic channel. He’s never properly seen the inside of a prison. He did do a walkabout of some hospitals, sat in the cafeteria, smoked his cigarettes, but then he had to get back to the real work at his desk. Everybody ends up in a hospital sometime. It’s not an alien place where you have to do much research.

“It’s a love story,” he tells me on the phone. “I’d write a journalistic piece if I wanted to explain something. I keep making it up when people ask what is it all about.”

So what is it like to write a love story?

“Writing fiction is a way of not dealing with reality more than I have to. People dream, and I counter-dream. I let loose on the page the way I can’t in life. I end up destroying everything.”

So what is it like to love across boundaries?

“Every person is a boundary. Just being able to love someone — to have this idea — divides us. Other boundaries come later. Love is the first transgression.”

So what is it like, this place, if it keeps you circling around the love happening in prisons, hospitals, police stations?

“It doesn’t tell me anything about the place I live in. I hope nobody reads it like that. It just tells me what a f**ked up morbid mind I have.” 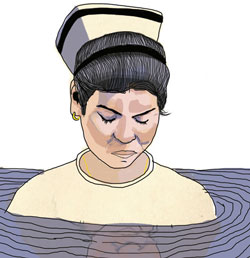 ALICE BHATTI, Catholic Choohra junior nurse, is lifted up by Teddy Butt, part-time bodybuilder and part-time lackey for the police’s dreaded “Gentleman Squad”, and is carried out of the Charya Ward of loonies at Sacred Heart Hospital. Noor, randy teen, the Sacred’s go-to vagabond and Alice’s confidant from their time in Borstal jail, wipes the dribble of three types of cancer from his dying mother’s mouth. Inspector Malangi, brutal and thankfully-notthat- comical head of G Squad, has once again got his man, some man, and is doing his duty in pinning the crime… or else. And so on.

Our Lady of Alice Bhatti is the love story of Alice and Teddy and everyone else in their lives. Job interview pangs, Choohra pride, underage buggering in prison, botched surgeries, cops at a bachelor party, religious vehemence, National Geographic sequences, blowjobs at gunpoint, miracle babies, popping eyeballs — Mohammed Hanif is an ideal tour guide because he is so matter of fact about the view. He is much more interested in his own story. He is a magnificently cantankerous and courteous writer, with a cutting sense of metropolitan Karachi life, wizened with surprises of delicateness when facing the brutal scenery, and ready to swoop into our most sensitive territories at will.

More than the love story and the caste story and the religious story, the book’s highest passion is the brutality of women’s lives in Pakistan. “Most of life’s arguments,” thinks Alice, “got settled by doing various things to a woman’s body… and what she learned was that nobody was surprised.” The men are dangerous even when they’re well-meaning, the women are gutsy but not stupid, and both convulse and smote even when they hug. The lunacy of a society where so much has come to depend on pulses of power and shame, and which of those you feel, and which of those you can make others feel, is Hanif’s actual emergency.

The description on its back says the novel is written “with savage humour and in sizzling prose”. You’ll find neither here. The humour is subterranean and wry, the present-tense prose has a quality of quiet obsessiveness, easy fluency, alert irony and, from about halfway into the book, that distinct panic that things are going to end badly. Hanif is also able to drum hotly when he wants to pitch headlong into a scene. He writes with a finality, a desperateness, with spare taps on the carpet before the sprint that feel like he loves it here but now can’t wait to leave.

It turns out to be a superb way to bend away from all the bored critics and dulled readers who insist on finding meanings in every story. Alice Bhatti, writes her creator, is “relieved that everything has happened so suddenly; she hasn’t had the time to examine her own motives, otherwise her love story would have turned into an anthropological treatise about the survival strategies employed by Catholics in predominantly Islamic societies.”

Our Lady of Alice Bhatti is the real thing, and Mohammed Hanif is a sly dog, a gifted ferret, and all-round cutie.