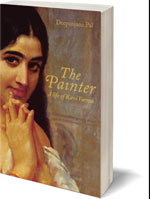 What intrigued you about Ravi Varma’s life to write this biography?
It’s probably the hangover of having wrestled with post-colonial theory as a student but I’m fascinated by the period to which Ravi Varma belonged. It’s a time when India was transforming from a cluster of kingdoms into one country and a sense of unified political identity came into being. I was also intrigued by the fact that in the course of a little more than 100 years, Ravi Varma’s work went from being enormously respected to dismissed and finally becoming pop art. It’s quite a journey.
Ravi Varma the artist-prince comes across as our first celebrity painter and man-about-town. How much of this was a calculated attempt at publicity and market-climbing?
Keep in mind that when Ravi Varma was working the party circuit, there wasn’t really a market to climb. He created a market for Indian artists. He did this by networking in ways that’d probably make the founders of LinkedIn feel inadequate. With his party animal persona, Ravi Varma made the point that artists could be of the same social status as those who commissioned paintings.
From using European realism to the mass-production of his images through his own printing press, Ravi Varma’s impact on Indian art has been immense, and there’s been a contemporary reaction of trivialising his work to escape his influence. How do we cherish his work now and save it from mediocre gazing?
The aspects that make Ravi Varma’s painting of Lakshmi laughably kitsch to someone are divine to someone else. Someone will satirise it, others will see it as an embodiment of beauty and yet another will want to light an incense stick in front of it. This is what makes Ravi Varma worth cherishing.
While Ravi Varma’s ideas of divinity and women went on to form our definitive imagery of religious and female beauty, he was also condemned as obscene in his own time. How does this resonate today with cases like those of MF Husain?
MF Husain will probably not like this but I think he and Ravi Varma do have some things in common. Both attempted, in very different ways, to develop an Indian imagery by adapting western styles and elements. While some of Ravi Varma’s paintings did fluster critics, I don’t think he was condemned as obscene, and certainly not for his portrayal of goddesses. He worked very hard to be respectable and mastered how to make his heroines titillating without being obscene.

How had Ravi Varma and his work changed for you by the time you finished the book?

From a painted signature, he became a person for me. Understanding how difficult it was for him to become a painter, construct the idea of an Indian beauty that wouldn’t be region-specific, fit into the different worlds that he inhabited, made me more forgiving. Now, he’s like the friend whose work I don’t always like but will champion all the same because he’s basically a good guy.