Some of his closest disciples didn’t visit classical vocalist Mallikarjun Mansur as he lay dying of lung cancer at home in Dharwar, Karnataka. Says Rai, “He was very fond of beedis. On his deathbed, he told his son (who smoked cigarettes), ‘Pilao’. He’d ask why the doctors didn’t cure him. When I sensed he wouldn’t survive, I asked if I could leave. I couldn’t bear it. He died the next day.” 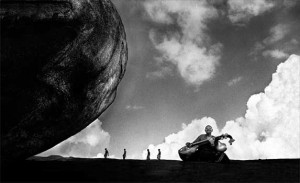 S Balachander
An entirely self-taught child prodigy, Balachander went on to become a veena and sitar virtuoso. Says Rai, “I took him to Mahabalipuram to interpret his music. His strokes are the deepest possible sound; they bounce so much, it seemed the rocks were approaching in rhythm and dance. I sat him there and wondered what to do. When you make yourself available, nature makes itself available. When I shot this, it went beyond my planning. Ab sur lag gaya.” 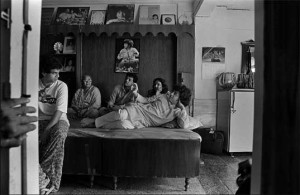 Zakir Husain has always brought a rockstar air to the tabla. Rai says, “I once asked him who plays better — he or his abba [tabla maestro Alla Rakha Khan]. He smiled mischievously and said, ‘I.’ This photo was taken in his Bombay bedroom 20 years ago, while the family was watching television. He’s treated like a superhero even in his house.” 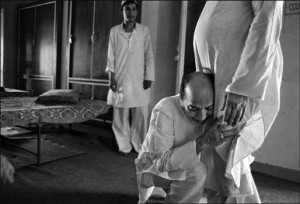 Vilayat Khan
Sitar maestro Vilayat Khan was as fond of jewellery onstage as he was of purity of notes. Rai describes him as “a complex, impossible man. I went with him on a visit to his Sufi Pir in Deoband. As soon as he reached, he did this drama of clutching his guru’s feet. There are very few people who don’t perform in life — it’s great for us photographers.”
More here.