AT THE Sundance Film Festival this year, where Peepli Live was the first ever Indian film to compete, an American farmer came up to director Anusha Rizvi and asked, “What was the name of that goat?” After recovering, Rizvi quickly ditched thoughts of all the goats in her film and invented a name. “I have a goat myself,” the man replied, “and I completely understand the film because this is what we go through as small farmers.”

Produced by Aamir Khan and shot in Bidwai, Madhya Pradesh (MP), Peepli Live is the story of a luckless farmer Natha and his brother Budhia in Peepli village in ‘Mukhya Pradesh’. About to lose their land to debts, a politician suggests they commit suicide for the ensuing government relief. News of this anticipated suicide spreads and everybody gets involved in prompt news cycles of celebrity, notoriety and opportunity. The film was also screened outside competition at the 2010 Berlin Film Festival.

In their airy Delhi flat a stone’s throw from Jamia Millia University, Rizvi, 34, and her casting and co-director husband Mahmood Farooqui, 39, swallow the gathering media storm against their long struggle to make this film. Rizvi is squirrel-like — zesty but wary — and after eight years of marriage, still easily alarmed at Farooqui’s calf-like eagerness to amuse himself. Though they share modest backgrounds, middle class aspirations and vices, and “an inability to smell money”, Rizvi and Farooqui coupled from opposing sides of UP, Urdu and literary cultures. Perhaps because they met in “the new India setup” while working at NDTV and not in a Muslim social milieu, they enjoy gloating over their vastly different backgrounds: he’s a purabia from Gorakhpur while she’s a western UP-ite, she’s Shia Muslim while he’s Sunni, his is a devout kasbah family while hers are communist zamindars.

Both have a deep literary heritage. His father was literary editor of the magazine Aaj Kal; the great scholar SR Farooqui is an uncle. Her grandfather, the celebrated Urdu poet Ghulam Rabbani Taban, was part of the Progressive Writers Group. “The Urdu literary world was deeply divided between the progressives and the modernists,” says Farooqui with glee. “My uncle led the night attack on the progressives.” “And at one point,” Rizvi quickly interjects, “my grandfather led a movement against his father and got him thrown out of Aak Kal — for publishing a reader’s slightly uncivilised language on Ismat Chughtai’s wish to be cremated instead of buried.” “But then my father returned,” Farooqui finishes.

Though Peepli Live will release on August 13, it’s been buzzing in the daily media for almost a month now. Khan’s genius for working the media chatter has had its ups and downs, from soft-bellied snippets repeating his claim that the debutant Rizvi will give Indian directors a complex, to folk singers who are suddenly agitating for more payment for their song about price rise in the film, to the filmmakers’ indignation at opposition parties wanting to use the song against the government (the BJP, Rizvi caustically points out, is in power in MP).

Farooqui remembers how Rizvi came out of their bedroom five years ago and announced, “I have an idea.” She had been jotting possible film ideas in a register for a while and this receptivity paid off when she saw a TV programme about farmer suicides. She was intrigued, she says, how the compensation is decided only after the death, “so what becomes important is the dead body, not the living person.” While she knew the entire story and its tone in that one flash, and knew she wanted Raghubir Yadav to play Budhia, it took her a year to write it and begin pitching. Khan confirmed his interest in 2006 and the contract was signed in 2009.

Besides their heritage, both husband and wife have acquired their own long pedigrees of zauq that entrench them in India’s cultural and intellectual elite. Rizvi studied at Sardar Patel Vidyalaya and St Stephen’s, while Farooqui attended The Doon School, St Stephen’s, Oxford and Cambridge. After NDTV, the duo shifted to Mumbai to crack the film industry. Rizvi returned after a year, and he followed a few years later to escape Bollywood’s boredom. Both freelanced: Rizvi did documentary work while Farooqui toiled on Urdu translations, a MiD DAY column and reviving the storytelling art of dastangoi.

For Peepli, they went through the usual routines of anxiety over their outsider, urban perspective on a rural story, but what’s more interesting is how their old-world literary instincts keep colliding sharply with Bollywood’s hurly burly sensibility. The couple carefully sidestep Khan’s comment that Peepli is his first production for an international audience, saying they made the film first for non-multiplex visiting Indians. Says Farooqui, “The multiplexes have cast out the masses, there are no ABC centres anymore — that’s why big films don’t make money in states like UP. We want Peepli to go to people who like to watch ‘dishum dishum’ films but also enjoy this film. This country can make films about real stories and solid characters and show it to those people and they can enjoy it. It is possible. The fact that these people are outcasted simply for their economic status is trash.” Rizvi concurs, “We are making English films with English thoughts, and trying to translate them verbatim into Hindi.” “The bombastic dialogue of ’80s films,” continues Farooqui, “was connected to Sanskrit drama, Urdu theatre, our poetry. There is a place for those films too, and Peepli is in some sense a nod to Mithun-type films and to our golden age of ’70s cinema — Deewar, Sholay, Namak Halaal, Zanjeer, Muqaddar ka Sikandar, Kabhi Kabhi — telling not western stories but our own stories. 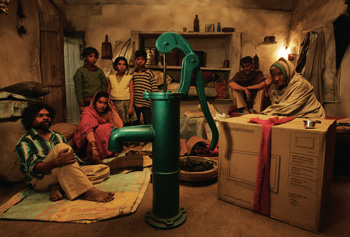 ALONGSIDE THIS intellectual tumult, friends point to the couple’s theatre background as key to their approach in their debut feature. Says friend and theatre person Himanshu Tyagi, “Most Indian theatre directors want to say something , and you see it in Peepli too.” The agony of a literary-commercial collision can also be seen in their resisting, and pressing Khan to resist, the media’s easy tags of ‘satire’ and ‘a film about farmer suicide’. The duo was uninterested in using Premchand’s now-mouldy sensibility of rural sorrow, but “I didn’t deliberately make it funny,” says Rizvi. “This is how reality is. It’s not an exaggeration or caricature.” Rizvi relies on juxtapositions for her comic effects rather than a larger plan of lampooning. Farooqui says, “Once you have such an idea it’s difficult to play it straight. We’ve seen the deen, heen dukhi kisaan continuously in realist gritty films — from Manthan to Aakrosh to Do Bigha Zamin. And we’ve seen the 1980s bastardised versions with Mithun and Dharmendra.” They claim Peepli would have worked even if Natha was a weaver or a potter instead of a farmer — what matters is showing India’s urban-rural chasm. Says Rizvi, “The bottom line is — we keep waiting for villagers to get a life. But what is going to happen to us when they leave the villages?”

While they are fans of newer filmmakers like Dibakar Banerjee, Anurag Kashyap and Vishal Bhardwaj, the duo is skeptical of talk of a ‘New Wave’ in Indian cinema, saying today’s insular films have one twentieth of the maturity and engagement of ’70s cinema. Says Farooqui, “We are far from when Vijay Tendulkar wrote dialogues for Manthan.” Rizvi wonders why film artistes don’t take prompts from their larger backgrounds, childhoods or parents, exclaiming, “We no longer have characters!” Farooqui’s co-dastango Danish Hussain, who helped cast and acted in Peepli, agrees, “All this talk of a new movement is academic — there’s no conscious move. [Even] a film like Ishqiya was an out and out commercial film dressed up as a rural story. We still have to get away from the big stars, item numbers and comedy gags.”

Khan, Habib Tanvir and Farooqui were all tempted to play Natha, but the filmmakers decided instead to tap Tanvir’s acting troupe, local actors and their theatre contacts. But what is the linking appeal between Sundance and Gorakhpur, without the impatient multiplex-goers in between? For all its hankering for authenticity and rootedness, Peepli Live risks the trapdoor of the opposite cliché — the international festival aesthetic of slick, genre-satisfying movies. Rizvi’s desire to “situate the film in MP — but it can happen anywhere” along with the fictitious place names cuts away from realism towards another mouldy form — the fable.

When the couple first arrived in Mumbai desperate for a producer, people like Saeed Mirza and Naseeruddin Shah advised them the town isn’t for literary-types. “In the ’70s and ’80s not having money was actually lauded,” says Farooqui. “Now not having money is a personal outrage to yourself. You are irresponsible if you don’t have a house, a car. There’s nobody who says, ‘It doesn’t matter, it’ll be fine’. That doesn’t happen. And the media is as much a part of the money circle as everything else.”

Now back in their Delhi base, Rizvi has no new projects planned while Farooqui prepares to release his first book — on the 1857 uprising in Delhi. Their vocabulary remains distinctly urban as they remember the time when they couldn’t afford a pair of jeans or jokingly charged guests to enter their home. “The thing is,” says Rizvi, “We are not depending on this to leverage us anywhere, it’s not a ‘career choice’ — it’s a film we wanted to make. We would have made it on video.”