ANOTHER FAMILY saga, oh yes! Patriarch won’t budge and the clan is at its wit’s end. Read on to see who wins.

Aravind Adiga’s new novel sits upon Mumbai city and does mentionable things. The residents of Vishram Society, (Tower A) take pride in their building in Vakola, but now a builder called Dharmen Shah wants to buy them out and they’re eager for their gentrifying cash. Enter retired teacher Yogesh Murthy on the third floor, who flowers into an unwilling hero. This 61-year-old ‘Masterji’ might have the spirit of a doddering 81-year-old but he stands as a bulwark against the city’s corrupting modernity. Soon everyone sours on him — the rest of the building, his best friends, his son. It is what happens when your wife dies on you. Both Masterji and Shah are recent widowers and cussedly self-destructive.
Adiga has mapped his story carefully, from introducing the minutiae of everyone’s lives to action sequences to city panegyrics to set pieces of lawyers and cops to a gradual denouement. He tries to tackle big themes like friendship, old age, Down’s syndrome, science vs spirituality, etc. And yet, Last Man remains a vexing read.

Adiga writes the familiar globalised prose of tiresome irony that’ll neither let up nor embrace its snideness (“the rear-view mirror of his scooter reflecting a quadrilateral of sunlight on to his upper breast like a certificate of clear conscience”). Often there’s a grace and several false notes on the same page. He is very good at simple velocities, such as describing a car ride: “Coconut palms bent by the ocean breeze and pigeons in sudden flight added to the sensation of speed on the long straight dash down [Marine Drive].” Or creeping time: “The blows of the axe came with metronomic regularity, like the hour hand in a grandfather clock: underneath them, he heard the nervous ticking of his own wristwatch, like splinters flying from the log.” Mostly, though, his sentences remain entirely resistable. His metaphor suds make us slide but get us nowhere. Dandruff sprinkles “like spots of wisdom”. A train crowd is “like an abdominal muscle” but then its men multiply “like isotopes”. All this is vexing given how well Adiga can occasionally write and how serious he is about it. 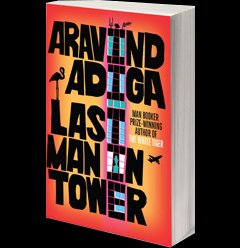 More than just phrase making, Adiga fails whenever he’s tempted to explain people by wrapping them in flimsy social foils: “the lives of the residents were slow and regular… It was not in their karma to know either gold or tears; they were respectable.” Once begun, Tolstoyan idiocies tend to multiply: “She envied Kudwa his happy family life — just as she knew he in secret envied Ajwani for owning a Toyota Qualis; just as Ajwani probably envied someone else; and this chain of envy linked them, showing each what was lacking in life, but offering also the consolation that happiness was present right next door, in the life of a neighbour, an element of the same Society.”

Shah, a professional hoarder of nuance, escapes these wrappings. The rest aren’t as deft — the baddies behave badly, the city hums formulaically, and Masterji is a magnet for bathos (“the straining coolies looked like symbols: hieroglyphs of a future… It looked like another Bombay waiting to be born. He knew that… each one of the solitary, lost, broken men around him had a place in it. But for now their common duty was to fight”).

With similar cheesiness and stentorian self-inflation, Shah comments on Masterji: “We are dealing with the most dangerous thing on earth, Giri. A weak man. A weak man who has found a place where he feels strong. He won’t leave Vishram. I understand now.” He has a point. Masterji is unconvincing as the moral centre of this parable, as “the man who does not want”. This alongside the narrative’s mawkish sentimentality robs it of any emotional power — we feel no moral shock finally. It isn’t Lord of the Flies of Vakola.

After all the false mysteries, strained melodramas, forced escalations and a Bollywood plot that says it hinged on a traffic jam, at least there’s a happy ending. On his wife’s death anniversary, one of the widowers gets it in the neck.